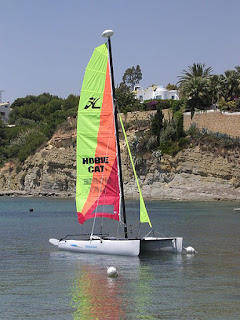 My friend, Mark, who owns a beach sailing club here, invited me to give it a try, assuring me they are lots of fun.  And we picked a good day, with the wind gusting above 15 knots.  The sailing area is relatively sheltered with islands so the waves were not big, but they were still a factor in tacking.

One of his employees, Keith, took me out to show me the ropes and explain how tacking, especially in the wind and waves we had, is potentially tricky.  So, off we went.  It is true, that the cats accelerate quickly - but, to be honest, a screaming reach on a Laser is just as exhilirating since you are even closer to the water.  We tacked a few times, only having to do the backward turn once.  Then we gybed once and it was my turn.

A few clear mistakes - inspired by thinking I was in a Laser.  First, I kept trying to bring the tiller extension around in front of me, instead of leaving it behind.  Not a good idea.  Second, I kept wanting to cross over too early in the tack - Keith told me not to cross over until it was clear we were going to make the tack (with the jib backed).  And when I did cross over, the trampoline felt clumsy (OK, I was clumsy) and it took me a while to get settled, with my feet under the toe straps.  But I did a few tacks and they worked - meaning at least we didn't stall out.  I am not saying they were elegant.

I was starting to feel tired - not being used to the boat I was not comfortable in maneuvers and that took a lot of energy.  So, since Mark was out practicing in a Topaz (he is going to the first Topaz UK nationals in the UK next week), I ended up going back to the beach (beaching a cat is a neat way to get ashore - no trolley, no centerboard, no hassle - just head to the beach and slow down a bit and there you are).  I rigged up a Topaz and went out for a spin with Mark.  Ours were rigged only with a mainsail, but they can also have a jib and even an asymmetrical spinnaker.  They are robust little plastic boats - good for beach club rentals, but not racing machines.  We enjoyed the sail and came back for a welcome beverage.

As for future cat sailing - I would like to try more and get to where I am a bit more comfortable.  But, I don't rank that as a top priority for now.
Posted by Keep Reaching at 9:41 AM