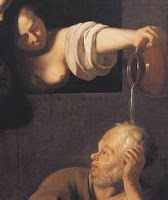 Daniel Dennett, a philosopher and co-director of the Center for Cognitive Studies at Tufts University is featured in an article in the New York Times. He is quoted as observing that

“Philosophers can seldom put their knowledge to practical use, but if you’re a sailor, you can. I just get a kick out of that.”

One may wonder about his use of philosophical knowledge when he named his 42 foot cruiser for Xanthippe, the wife of Socrates who had a reputation for being an argumentative, quarrelsome, nagging woman.  Perhaps those characteristics would be attractive to a philosopher. However, she apparently didn't limit herself to mere debating - a famous story about Xanthippe involves her emptying a chamber pot on Socrates.

What does that say about Dr. Dennett and his boat?
Posted by Keep Reaching at 7:01 PM 1 comment:

I have never been on the open sea in a little boat, but the ideas is definitely less than reassuring.

But, recently I read about a 74 year old Swede who will soon be embarking on a solo, non-stop sail around the world in a ten foot boat (yes, feet, not meters).

Sven Lundin, who goes by the name Yrvind (whirlwind), has been in the news over the last six months as he prepares his ten foot boat.  He is no stranger to really small boats on big seas. In 1980 he was awarded the seamanship medal by the Royal Cruising Club after he soloed a 20 foot sailboat around Cape Horn.

His current project is documented on his Website and in numerous articles and all I can say is that I wish him good luck. The boat is not exactly a rakish beauty - more of an enclosed bathtub. In addition to food, he is packing 220 pounds of books plus a Kindle (to be recharged with a foot operated mechanism).  It is also equipped with a seatbelt to keep him safe during rough weather and he says "I'll be completely safe. It's like a ping-pong ball in the sea, it never breaks." 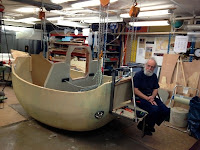 I was intrigued to discover there are a number of brave souls who have gone on long voyages in tiny boats.  A good overview is in this list of micro cruisers whose first entry is, very fittingly, Captain Bligh. Admittedly his boat was 23' but still quite an exploit with 18 men.

Another one who really stands out is Hugo Vihlen who sailed across the Atlantic first in his 6' boat April Fool and then in his 5'4" boat Father's Day.  He wrote a book about each.

There is some criticism of these ultra-tiny boats - that they are little more than drifting flotsam and not really sailboats.

There was even a race planned called Around in Ten that hoped to organise a race around the world in boats of ten feet, but it never materialised.

I will stick to a Laser close to shore.

Where is the above ?

Hint # 1 - A Japanese woman will be visiting next week.

Hint #2 - A Dutch man will be visiting next month.

Who are the visitors referred to in Hints 1 and 2 ?
Posted by Keep Reaching at 7:52 PM 4 comments:

A three day Laser sailing clinic is being conducted at our club by Kostas Trigonis, a world champion Tornado sailor and ex-Olympian 470 sailor - and luckily for us, a cousin of one of our sailors.

Although I can't sail yet due to my recent hernia surgery, I am attending and driving the RIB with Kostas on the water.  A great learning experience with a very down to earth guy.

Kostas began the clinic with a very interesting question - what is the sport of sailing?  How does it differ from other sports? What makes it unique?  Sure there are similarities but consider how different it is.

He made a fascinating comparison - how would basketball be played if it were like sailing.

The game would be played on a rectangular court, but a rectangle that changes shape and orientation constantly, at unpredictable intervals.  Sometimes it is best to run to the left to reach the goal and sometimes to the right.  You can run straight to one goal, but you have to zig zag toward the other one.

Sometimes the goal is moved by the officials during the game.

Running speed is different on different parts of the court and these areas shift constantly.

You dribble the ball down the court - but sometimes the floor is smooth and sometimes lumpy and rough or even hilly.

If a player commits a foul, there is no referee to blow a whistle.   The fouled player yells "Foul" and the offending player simply takes it upon himself to turn in a circle a couple of times.  In case of disagreement, it is all handled after the game during a court-like proceeding.

Who would be crazy enough to play such a sport?