Last weekend, the wind was a bit stiffer than normal - around 15 knots, gusting to near 20.

I had one decent and one lousy race. Good starts (positive point) but horrible gybes, a couple ending in a near capsize.

Coming back in I thought about it and realised that I was sheeting in far too much in preparing the gybe - overreacting to concern (fear) about the higher wind, thinking wrongly that it would be helpful.  Of course, it was just the opposite because as soon as I gybed the boom was too far in (and I wasn't letting it out) and the wind just pushed everything on around, rounding up quickly into a near capsize.

So, with the wind today about the same, I went out to practice gybes and especially sheeting to less than than 45°. One of our better sailors joined me and we practiced going around 2 buoys about 50 meters apart.

I was not sheeting in too much but still managed to do a couple of bad gybes, including one capsize. Frustrating. Which was mistake number one today - letting the frustration get to me.  As my friend drily noted as he watched me on my second capsize - "You're spending more energy cursing than you would in just righting the boat".  He was absolutely right.  So, instead of wallowing in self-reinforcing negative thoughts, I managed to get on with things -  the first bit of progress today.

Going around the buoys we were gybing from close hauled and so I then concentrated on wide approaches turning/bearing off smoothly, sheeting out to a very broad reach and then, with the boat balanced, gybing. It worked OK but my friend told me to sheet in a bit as the gybe is about halfway through, with the last part the jerk to clear the main sheet.  I did so and concentrated on smooth turns and it all seemed to click.  For the first time ever, I did several gybes that seemed to be part of a smooth, natural turn - not a shambles of reactions, fits and starts, praying it would not go wrong.  I still have a lot of work to do to improve them but I came ashore feeling I had done 2 things right - recognised and gotten over a mental attitude and gybed in tune with the boat.
Posted by Keep Reaching at 8:12 AM 4 comments: 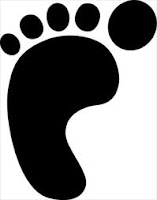 Now that Ramadan is here again I have shorter working hours and can easily get in an hour or so of sailing after work.

I went out today to practice and while it is starting to be rather toasty (around 42) I managed by pacing myself and drinking a camelback of rehydration drink.

With the wind relatively light I decided to concentrate on getting across the boat more efficiently on tacks and gybes. I was feeling clumsy about it and sometimes even catching my lifevest on the boom or sheet and just generally feeling clutzy and sometimes late in getting where I need to be.

I found the obvious solution was to concentrate on my forward foot.  When preparing the tack or gybe I put the back foot across, on top of the hiking strap.  The forward foot stays against the windward side of the cockpit and when the boat heels to windward in the turn, it is the downhill foot and all I have to do is think about pushing off with it - up and to the other side, ready to hike out.

It seemed to work.
Posted by Keep Reaching at 11:21 PM No comments: 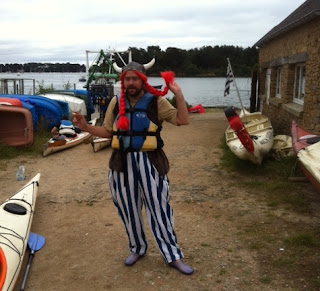 During my recent vacation in Brittany, I rented a kayak for one day.  Bonnie would probably not approve of the type of kayak used - it was not a "decked" one (I don't know if that is what you call them in English - in French they are referred to as "ponté") but a sort of one piece molded thing. You sit on it, not in it. It kept us afloat, but obviously you could not do a roll in it. 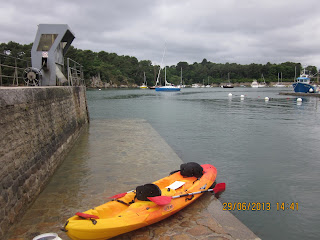 We started out in Baden and, carefully timing things to be going with the tide both ways, paddled over to the the Conleau part of Vannes and back.  Nothing dramatic, but a nice paddle including a stop at one of the many islands on the way.  We saw several large jellyfish that I wasnt familiar with - their main bodies slight bigger than a basketball and very solid looking. A guy at the kayak place said they are harmless.

But the most interesting part of the day was observing the French at the kayak rental site. In the morning, we saw several young men preparing to rent kayaks and all were bedecked in costumes, the best being the above young man dressed up as Obelix (the PFD looked like a real paunch).  I have no idea why they were dressed up, but he was happy for us to take his photo.  However, he did confess when we asked that his cigarette was not a Gaulois.

Then on returning there was a wedding party of some dozen people renting kayaks, including a long dragon boat.  They all had straw hats with the bride and groom's names on them and they had all clearly been partying before they got to the kayaks. They were taking the boats over to a nearby village and I suppose there were some sort of continuing festivities there to greet them.  We watched them take off in various states of efficiency/sobriety. The women on the dragon boat were singing lustily and it looked like they were having a great time. 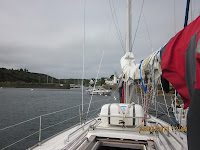 I have not blogged lately since I was on a one week RYA Coastal Skipper Course in Brittany. I had a great time and learned a lot - although I still have to sharpen my recognition of all  those day shapes, sounds, lights etc.  Admittedly, we rarely encounter minesweepers where we race our Lasers, but from now on I will be prepared to instantly recognize the dayshapes and lights of one (my alert readers will certainly recall that they are three all-round green lights or three balls, one at the foremast head and the other 2 at the ends of the fore yard) and casually announce to the other racers - "Ahoy, mates, that is a minesweeper bearing down on us - ColRegs note that it is dangerous to approach closer than 1000 meters."

Although I learned a lot, most of it had nothing to do with a Laser.  Our boat had 2 sails and all sorts of lines, sheets, halyards, pennants, etc that you don't see on a Laser.  In addition, we had to pay close attention to water depths because pulling up the centerboard was not really an option - since it is solid steel and permanently bolted on.  One advantage for the boat however is that the sails can be lowered and furled without removing the mast.  It took some getting used to.

We sailed out of Vannes, going through a gate in a highway that is opened only at specific times into the lovely Golfe de Morbihan and then around the Baie de Quiberon,  Sauzon on Belle Isle (pictured above), Isle de Houat, Isle de Groix, Lorient and lovely places in between. The sailing is really great - nice wind, and mostly protected from the Atlantic swells. The weather was, of course, a bit different from Abu Dhabi and on 2 days we wore foul weather gear. We had one day of Force 5 with gusts to Force 6 and sailed with 2 reefs.

Dave, the instructor, was a Brit who created an RYA school in Brittany 2 years ago with his wife and and he was a very good instructor.  He had a habit of coming up with little quizzes all the time and one that I particularly remember was "what are all the ways of communicating that you are in distress"?

We got most of them, but he had to help us with one (paragraph (h) of Annex IV of the ColRegs):


Apparently the flames and accompanying dark smoke make a great signal, if they are properly confined to the aforesaid barrels and don't set the boat and sails on fire.   Not so sure that would be a good one to try on a Laser.