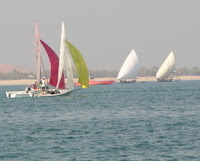 Last weekend we had a regatta and I crewed for a colleague in an RS400. Lots of fun and we did get a third place.  A few good spinnaker sets and a few not so good.  Those asymmetrical spinnaker reaches are a blast.   One OCS.

But the best part of the weekend was after the regatta finished.  We were sailing back and also sailing back were about 10 dhows which had just finished a regatta of their own. They were in a single file line heading to go past a reviewing stand where I assume some local sheikh was passing them in review.

It was a lovely sight with their voluptuous white sails set on a broad reach.

We passed one and the crew was singing, accompanied by a man playing a hand-held drum.

When they had passed the reviewing stand, each one dropped its sails and then a chase boat brought them their anchor.

As explained in an earlier post, the dhows start the race with sails down and raise them at the starting signal. They leave their anchors to be picked up by an attendant motor boat and then at the end of the race they head into the wind and drop their sail. The motor boat then comes up alongside and heaves the anchor overboard and throws the anchor rope onto the dhow.
Posted by Keep Reaching at 10:58 PM 1 comment:

The following speech recently won a first prize at a Toastmaster's evening.

Maybe some of you can relate to it.

What do you call a boomerang that doesn’t come back to you?

I didn’t know he was a sailor.  I thought he was a lawyer.  But lawyers who sail call themselves sailors, not lawyers, and it is the witchery of the bounding main that does that.  It makes all men who love water and boats, sailors.  Their neurons get all squashed up and they think a sheet is a rope and that seasickness is fun.

You think you’re having a perfectly interesting conversation with them and they stop and freeze, sort of like a setter flushing quail.  All you have to do is follow their line of sight to find the boat in the landscape.  And it doesn’t even have to be on the water; sailors get like that even when they see one on a trailer on the N 165 going at 110 km an hour.

I didn’t get it at first when early in the courtship he proposed romantic weekends in seaside towns.  My kids figured it out before I did.  I was once delightedly looking at a photo of the new man in my life looking at me with love in his eyes, and my young daughter looked and said, oh look how he’s looking, Mom, you must have been standing in front of a boat.

My man, my sailor lives in Abu Dhabi, where he belongs to the sailing club and races little boats called dinghies every weekend.  He misses me though, and his dearest wish is that we sell everything we own and sail around the world for the rest of our lives.  His second dearest wish is that I would get on a boat with him. So I decided one day to give it a really serious try.

The entire sailing club got involved.  Pam said “here are my kneepads, you’ll need these, my knees are shot since last summer on the boat”, and John found me a helmet, saying “you’ll need this so you don’t get a concussion from the boom”, and Sue lent me these funny gloves with no fingers, telling me I needed them to not get rope burn, and as for my sailor – he was as happy as Captain Ahab sighting Moby Dick as he put me in a strange outfit sort of like an overall, except it had a hook right here.  We sailed off to start the race, half the club on the shore to watch us, and as we waved I said to my sailor, sweetheart, what is this hook for?  “The trapeze” he told me.  The trapeze?

Have you ever seen those action shots of world-class sailors where they are suspended from a wire, leaning backward over the water to keep the boat from tipping over?  That’s called the trapeze, it seems.  And this is what my sailor wanted me to do.

You have to stand up on the gunwale, that is, the side of the boat, and hook the wire attached to the mast to the hook on your overalls, and for a heart-stopping moment you have to let go and drop back, trusting that it will catch you before you fall into the sea.  Well, I let go, and it caught me.  So far so good.  In fact I was so thrilled I yelled to my sailor:  “Look!  Look!”  I felt great!  A champion!  On the cover of Sports Illustrated! And he grinned and yelled back, his hand on the tiller, his hair in the salty breeze, his eyes squinting in the sunlight:  “And we’re making great time too!  We’ve left those stragglers behind!”

However, ladies and gentlemen, let’s not forget that the boat in the meantime is not static.  It is not only moving forward; it is dipping back and forth over the waves and rolling over at a sharp tilt.  My victory was short-lived; in fact it only lived about three seconds before I was not standing on the gunwale, I was dancing on it, and then skittering on it, and then I wasn’t on it at all.  Like an enormous pendulum, the boat swung me around on my wire in a half circle around the front of the boat.  My sailor looked up just in time to see me whizzing past him across the bow to smack into the sail and capsize the boat.

Ladies and gentlemen, I will not trouble you with the details of my struggling out from under the sail and the ropes; or helping heaving the boat back up again; or being unable to get back up into it because my muscles were quivering so much; or the sailing club member fishing me out of the sea by the seat of my pants to heave me into a rubber dinghy, and mercilessly tossing me back in the boat to help sail it home.

No, rather, when I was finally dry, warm and with a frozen daiquiri and a plate of peanuts in front of me in the bar, as I listened to all the sailors talking about what a great time it was, I thought to myself…I wonder if I could get him interested in something simpler…like boomerangs.

An alert Sunfish blogger, My2Fish, has posted a video of a wing sail on a Sunfish. Amazing.

Thanks to alert reader, O Docker, for alerting me to Jacques Cousteau's turbosails (turbovoiles), which were inspired by the Flettner Rotors.  They are not the same, but similar in that they are vertical ovoid shaped cylinders (not round), but with moveable flaps attached.  The cylinders do not rotate.  Instead they have grills on two sides which can be opened or closed and can be oriented to the wind so that low pressure develops.  In addition, they have an aspiration system that sucks air from the cylinder, making the air flow more closely around Turbovoile.

Cousteau's first boat, with a single Turbosail, was the Moulin à Vent, which he sailed from Tangiers to (almost) New York where it encountered winds over 50 knots which broke the Turbosail which fell overboard. A second boat, the Alycone, pictured above, was constructed in 1984 with two Turbosails and it made several circumnavigations.
Posted by Keep Reaching at 8:37 PM 1 comment:

Although I am not an engineer by trade, my interest in sailing has lead me to be fascinated with fluid mechanics (without the math).  The problems of cavitation cavitation  and super-cavitation were new to me until I saw some interesting articles about developing high-speed sailboats.

We all are told that sails act like airplane wings (or AC45/72 wings) that rely on the Bernoulli effect to create lift in the direction of lower pressure produced by the air moving more quickly over the curve in the sail.  Sometimes I am able to use that effect to move my Laser.

I recently ran across an interesting technique to do the same thing in a very different way - the use of the Magnus effect which, as my erudite readers will know, is the effect "in which a spinning cylinder past which an external stream is flowing receives a lateral thrust due to the lower pressure on the side of the cylinder where the cylinder’s motion is in the same direction as the streaming flow."  In other words, a spinning cylinder has lower pressure on one side which will create a force in that direction.

So, to harvest this phenomenon on a boat, one simply makes a vertical cylinder, sets it to spinning and it acts like a wing or sail.  These cylinders are called Flettner rotors after Anton Flettner who was the first, along with a colleague, Prandtl, to have put such (patented) cylinders on 2 ships in the 1920s.

A German wind-turbine company, Enercon, built a ship in 2010 using Flettner rotors, along with conventional propulsion. You can check it out (in German) in this video which has a good animation of the Magnus effect.

In the 1930s Thom reported significant increase in lift by adding discs to the cylinder. However, before any of you decide to add Thom discs to the Flettner rotors on your boat, you may wish to consult the findings reported by the Turbulence Mechanics Group of the University of Manchester which "failed to confirm the much enhanced lift coefficients that he reported."