We had an incident in our club last week that left a bad taste in our mouths.

One of our best sailors - let's call him Sinbad -  has not been sailing with us much lately since he often goes to another club with better competition.  When he races with us he is almost always in the first 2 places. But last weekend he came to sail with us and we were glad to see him again.

Since our best sailor was not there, Sinbad was practically guaranteed to win the 3 races scheduled for the day - and he did so.   But, it was clear that he was cheating in the process.

At one of the starts I was coming up below him near the Committee Boat and yelled "up, up" and he just looked at me and said "but I am stopped here and can't do anything".  He made no effort to sheet in and turn up.

On a broad reach toward the leeward mark, I was about 2 boat lengths behind him and another boat and he was blatantly violating Rule 17, luffing the windward boat far, far above his proper course. I yelled at him and said "Hey, Sinbad, you are way above your proper course. This is Bull***".   He didn't react at all and sailed on.

The wind was relatively light and on several other legs he was rocking and pumping like crazy - one particular incident occurred when a middle of the fleet sailor was briefly ahead of him.

No one protested and no said anything to him back on shore about the cheating. He acted as if nothing had happened and didn't say anything about my yelling at him.   He left as soon as his boat was derigged.

Several of us talked about it afterward - basically shaking our heads and saying the whole thing was so unnecessary for him.

I really don't know the best approach to take.  We don't have a culture of protesting in our club and when an incident does occur on the water, we usually discuss it in the bar afterwards and sometimes I post a Rules Quiz based on the incident for comments and general education during the following week.

But Sinbad is very experienced and surely knows Rules 17 and 42 and I had shouted at him on the water. He chose to blatantly cheat.

Should we have protested or at least said something back on shore and gotten the issue out in the open?  Sinbad would have won anyhow. Nothing really changed for the other sailors' standings.

Sinbad has been a supporter of the club, volunteering for duties in the past, and his son is very active in the youth program. And Sinbad is sailing less and less with our club.

As a general matter, sailing is self-policing and no one, including the protest committee, is required to call a foul.  If no one wants to protest, even in big regattas, many judges will leave it at that for routine violations, even if they see one. Nothing in Rule 60 requires anyone to protest a boat, with "may" being the operative word (except when the Race Committee receives a report from an equipment inpsector or measurer on weighing of clothing/equipment or compliance with class rules)..

But, of course, sailing with Sinbad will never the same for several of us who understood what was going on.  I had always felt he pushed the limit of rules, but this was far beyond the limit.

What is the best solution?
Posted by Keep Reaching at 10:48 AM 4 comments:


I spent the last weekend at the Monaco Yacht Club for an ISAF Judging Seminar.

It was a great experience with excellent instructors and fellow geeks from 8 countries.

Needless to say the facilities were not your typical dinghy club. It's the multistory white building below. 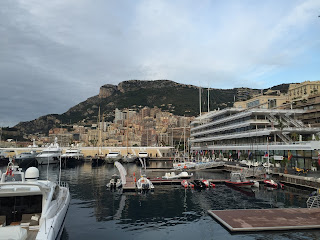 It is certainly the nicest yacht club I have ever been in (and the only one I have been to with a jacket and tie required for dinner). And it has a superb bar with the bar in the shape of a famous Riva Aquarama. 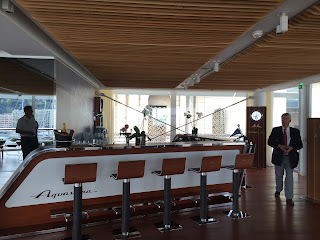 We had lunches on a terrace overlooking the water and various cruise liners and yachts. 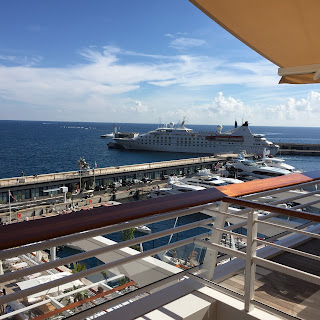 Quite interesting to see an Optimist regatta (the little white dots in the photo above) just behind a cruise liner and various posh yachts. 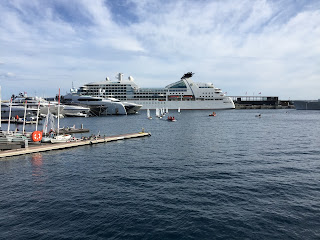 I also visited the Oceanographic Museum and Aquarium.  Both were very well done and worth the visit.  I especially enjoyed some beautiful jellyfish displayed in a soft blue light, pulsating slowly. And I saw what is probably the ugliest and deadliest fish in the world – a rockfish with venomous spines.  It is really hard to see against the bottom - two of them in the photo below. According to the information displayed, stepping on them or otherwise getting injected is fatal to 25% of human victims.  Yikes! 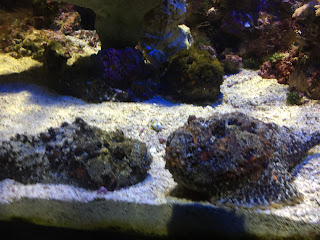 And another fish (I forget the name) is born a female and dies a male. Not sure about all the details but it brings the notion of transgender to a new level.
Posted by Keep Reaching at 10:55 PM No comments: