While rigging up for our weekly races, I chatted with our Kiwi sailor, who in addition to being our best sailor is a very nice fellow, always ready to share tips and strategies.

The line holding my toestrap had broken just before a race last week and I had repaired it temporarily with a bit of line I had with me.  Now I was replacing it with something a bit better and I asked our Kiwi how he thought I should thread the lines.  He took the time to show me how he does it, but most importantly, we told me how he would set the looseness for upwind - he sets the toestrap so that I you pass a stick under it at its highest point, the stick would rest on the deck on both sides.  The point of this is to make straight leg hiking easier - and it does.

I had been using the toestrap tighter than that - why I really can't say.  But once I loosened it to what he suggested it did make straight leg hiking easier, with the calves more in line with the deck and not pushing down on the corner of the cockpit.

I did relatively well in our first race, finishing in the top quarter of the fleet. In the second race I did even better - but was also OCS which I learned about almost at the finish line.  The tide was pushing all of us toward the start line and I was struggling not to be pushed over, backing my sail and hoping. I heard no signal and saw no X flag so I thought I was lucky and sailed blithely on. But, it turned out the lack of signal and X flag were the result of a new member serving as Race Officer for the day - and who didn't know about those details.  Oh well.
Posted by Keep Reaching at 6:13 AM No comments: 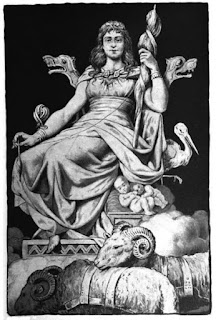 I have often wondered why I make so many mistakes in our races and why my boat speed is the same as a Laser dragging 2 large anchors.
I now have the answer - because I am racing on Fridays.   As John Vigor explains in his excellent blog, Friday was the day of Frigga, the Norse goddess of love and fertility, the wife of Odin, the most powerful of all the Northern gods.  Then when the Christians came along they claimed she was a witch and all sailors became very superstitious about starting a voyage on Friday.

I get it now. Frigga is watching me, incensed that I have started my race on Her Day.  She sends her minions to wait for me at the windward mark, snarling my mainsheet just before I need to bear away.  And then they scoot down to the leeward mark, making sure I round up just a tad too quickly after the gybe, catching my boom in the water and laughing derisively as I take a swim.

Yes, I know everyone else in the race also started the race on Friday, but they somehow escape her wrath. Have they made some burnt offerings before the race?  Sacrificed a goat ? Do they know some ancient Norse incantations ?

Are there any Frigga worshippers among my readers that could suggest the best remedy (not involving hard work and more training) ?
Posted by Keep Reaching at 7:40 PM No comments: 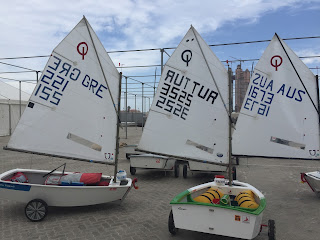 I really love international regattas - seeing all nationalities having fun together.

At the recent Asian Federation Youth Championships, where I was on the jury, I took the above snapshot of a Greek and Turkish Optimist together.  In fact, the story is even better - the Turkish family stayed in the Greek family's house in Abu Dhabi.