We had our annual Laser regatta this weekend and it was the best one yet.  Excellent organisation, good racing and good participation - we even had a team from Oman.  Plus we had three Olympic sailors attending (not racing).  And it was good that the first three places came from different local clubs (ours was third place).

The first day was challenging with gusty conditions approaching 20 knots and outgoing tide against wind, creating a lot of chop.  Two races in the morning and then, as is the custom, we stopped for lunch and to allow the locals to attend Friday prayers.

I had a poor morning sailing, capsizing several times and generally struggling.  But at least I finished both races while about five sailors dropped out after the first one.  On a positive note I managed to do all the downwind legs with no death rolls or other disasters. I tired the four point stance I have written about before but felt slightly unsure of it because my rear leg/knee/foot didn't see quite as solidly planted as felt right. So I ended up in a sort of 2 point stance with my back foot against the opposite rear corner but near the hiking strap so I could slide it under quickly if need be.  This seemed to give me more ability to quickly shift weight.  I am not sure it is better and I will certainly try the 4 point stance again.

By the time we came in for lunch, I was quite tired and I debated whether or not to go out in the afternoon and finally decided not to. The forecast was continued gusty conditions and I just didn't think my not-so-young body would take kindly to several more hours of struggling with the wind and chop.  Several others came to the same conclusion and the afternoon saw only eight standard Lasers on the water instead of the sixteen that started in the morning. I hitched a ride on the media boat.  I got to chat a bit with one of the Olympic sailors who has also won a Tornado World Championship.  As seems the case with so many world class sailors (at least the few I have met), he was very down to earth and open.  And I was very impressed how he was constantly watching the racing and taking everything in - which was good because the next day we used him as the jury for a couple of protest hearings between young 4.7 sailors. He had personally observed the infractions and was able to quickly silence the coach's objections.

Today started with no wind at all and we weren't able to start racing until after noon. But we managed to get in 3 relatively short courses - which made things much more interesting because we stayed much closes and there was a lot more action around the marks.   I had a much better day, getting three decent starts, the last one being second off the line and going fast.  And I made a conscious effort to constantly look for wind and that paid off.  The right side of the course was heavily favored on the beats because the outgoing tide was there.  So everyone went right for the most part but I gained some places by tacking on wind shifts when others missed them.    Overall a very nice day.
Posted by Keep Reaching at 9:19 PM 1 comment:

Thanks to the ever alert Tillerman, I can make a proper attribution of the excellent Racing Rules of Sailing chart I recently posted.


Apparently the chart comes from Understanding the Racing Rules of Sailing by Dave Perry and illustrated by Brad Dellenbaugh.

I am not surprised - the chart is excellent and these fellows are top RRS gurus.

So, I hope these gentlemen will not object to the post.

If you are at all interested in the RRS, you should buy their book and subscribe to the excellent Speed and Smarts newsletter which is published by Dave Dellenbaugh and illustrated by Brad Dellenbaugh, who is also, by the way, the Sailing Director for the New York Yacht Club, a former Olympic Soling campaigner and was recently the chief umpire at the America's Cup in Valencia.  Definitely worth checking out the Speed and Smarts website and Facebook page.

Dave Perry also gives great tips and advice on the US Sailing website.

Posted by Keep Reaching at 7:21 AM No comments:

RRS on One Page

Knowledge of the Racing Rules of Sailing is always a relative thing.  Yesterday over post-race beers we were rehashing a tangle at the downwind mark and it was a clear case of a relatively new sailor violating Rule 18.2(b). She was clear astern of another boat entering the zone, but as the boat entitled to mark room started going a bit wide to round the mark closely, she dashed inside, yelling "overlap" and no doubt thinking she had been clever.  The helm of the boat entitled to mark room begged to differ and in any case it was too late and they bumped each other.

So, we started to set up a reconstruction of the event on the table, using beer mugs and iPhones representing the mark, boats, etc.  As the new sailor began to argue her case in an animated fashion with all the props, I innocently asked "OK, but first - where is the zone?"  She replied "What's that?"

So, I explained what the zone is and the basics of Rule 18.  She understood, admitted her mistake and took it all in good grace. The bumped boat entitled to markroom likewise took it in stride and all was forgiven.

This morning, the helm of the bumped boat sent the following chart to all members of the club and I wanted to share it here - it is excellent. 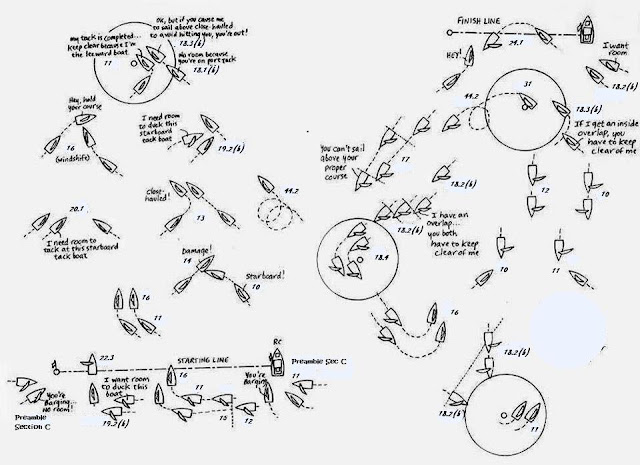