Yesterday, I actually won a race at our club. If I analyse things closely, I suspect that one factor may have been the fact that our two best sailors were not there. But nevertheless, it was nice.

Winds were quite light with an outgoing tide. So, I paid close attention to where I thought the tide would be either a positive or negative factor.

In the first race I had a very bad start because about a minute before the start it did a simple gybe and my sheet looped around the boom, which took about 30 seconds to undo which meant I was late to the start.  But luck was with me - the outgoing tide was not properly calculated by most of the fleet and a good number were OCS, resulting in a general recall.

On the restart I had a good start midline with clear air. Top mark I was in top 3 and then 2 reaches and rounded the bottom mark in same position. Then I followed the leader to right, not having properly thought about the leg before rounding the bottom mark - the start line was to be a gate on the upwind leg but the Committee Boat had moved to the upwind mark and been replaced by a RIB. So apparently the leading boat forgot about the gate and went way right. I started following obliviously but then noticed the 3rd boat of our little pack heading back left and I suddenly realised my brain had not been in gear.  So I went back and eventually finished second (the leader never went back and missed the gate entirely which was noted at great length over post-race beers).

The second race was a good start.  In both races I did a transit of the line with a building on shore and parked near the line (back a bit to take account of the tide) and did a trigger pull about 12 seconds before the start after checking to leeward.  It worked. Then, since the winds were light I paid a lot of attention to the things one is supposed to - sitting well forward in runs and broad reaches, minimising movements, slight leeward heel upwind when very light wind and, most importantly, really looking for puffs and pressure.  And of course, keeping the boat perfectly flat when a bit of breeze developed.  And, having plenty of time and no strong winds to contend with, doing all mark roundings deliberately and carefully.   All of this paid off and I was pleased to have rolled more than one boat.

I had the impression that I sailed more intelligently than I usually do and I am sure that a major reason was the light wind. First, as a relatively lightweight sailor for a standard rig (77 kg) in higher winds, light winds are better for me.  In addition, the light winds prevented distractions of dealing with higher wind.  Just a week before I went out in winds 15-20 and practiced gybing around marks but I kept making the mistaking of gybing too close to the mark and coming up too quickly, resulting in the boom hitting the water and then a swim.  I knew better but was, I think, trying to "improve" by being quicker around the mark.  Of course I was doing just the opposite.
Posted by Keep Reaching at 7:12 AM 5 comments:

The Volvo Abu Dhabi stopover is finished and I will have to go back to the day job tomorrow. But it has been a great experience.  First, was the umpiring clinic which really taught me a lot about the rules and the way judges/umpires apply them.

The last couple of days I was able to drive a Media boat for both the Inport Race and the Departure. Great way to see things up close - only the official Volvo photographers and TV boats (and helicopter) get a better view. And there was a French guy on our boat who said nonchalantly that he was a sailor, but as we chatted more, it turned out that he had been in 5 America's Cup campaigns, the Extreme Series, etc.  Obviously he was very knowledgeable about it all.

The Inport race was great, with the girls kicking ass in a big way. Sure, they won by going right and maybe they only went right because they were sucking bad air and also wanted to cover Dongfeng - but at the top mark they were in command and never looked back. Great to see - lots of enthusiastic supporters dressed in the team's blue and magenta colors.
And Brunel looks very consistently strong. I would not be surprised to see them on the podium in Gothenburg.

The departure day was so foggy that we could see very little of the triangular course and the media people in my boat were happy to just park near the bottom gate and wait for the boats to come back around. By the end of the race, the fog had cleared and it was great seeing Abu Dhabi leading the pack toward China.

A couple of weeks ago, I got to attend a talk given by Bouwe Bekking, the skipper of Brunel, that was for Volvo Volunteers. Although only about a dozen people showed up, he spoke to us for about an hour, including a short video about Team Brunel.  He talked about the challenges of putting together the team and campaign.  Lots of contacts, presentations and rejections in the money search. Then putting together the team - he said after they narrowed things down to around 25, they had everyone come to Amsterdam, but he intentionally did not pay anyone's trip - he wanted to see how motivated people were. And one of the eventual choices, Rokas Milivicius, impressed him by having taken a bus from Lithuania - over 1,600 Km.  He also said that when the candidates came for their initial physical work, the first thing he did was ask them to remove their shirts.  He admitted that part of the reason was that the press was there, but also he thought it a good way to assess general fitness quickly.

Overall, a very impressive guy. Certainly anyone is the skipper role has to be a diplomatic/politician in addition to being a great sailor.  And like all good politicians, he gave the impression of being very accessible and fixes you with his look and makes you believe he is really speaking to you and wants to focus on you.

I asked him about the switch to one design and he was very enthusiastic. First, he said it made the campaign much easier. Without it, a campaign must first find the money and then find a designer and boatyard before thinking about the team.  With one-design, once the money is found, one can go straight to finding the team and beginning training.

On the departure day our media boats were parked next to the Volvo boats and right next to Brunel.  We had a front row seat to the families saying good-bye and, although I don't understand Dutch (or Lithuanian), it was moving to see. 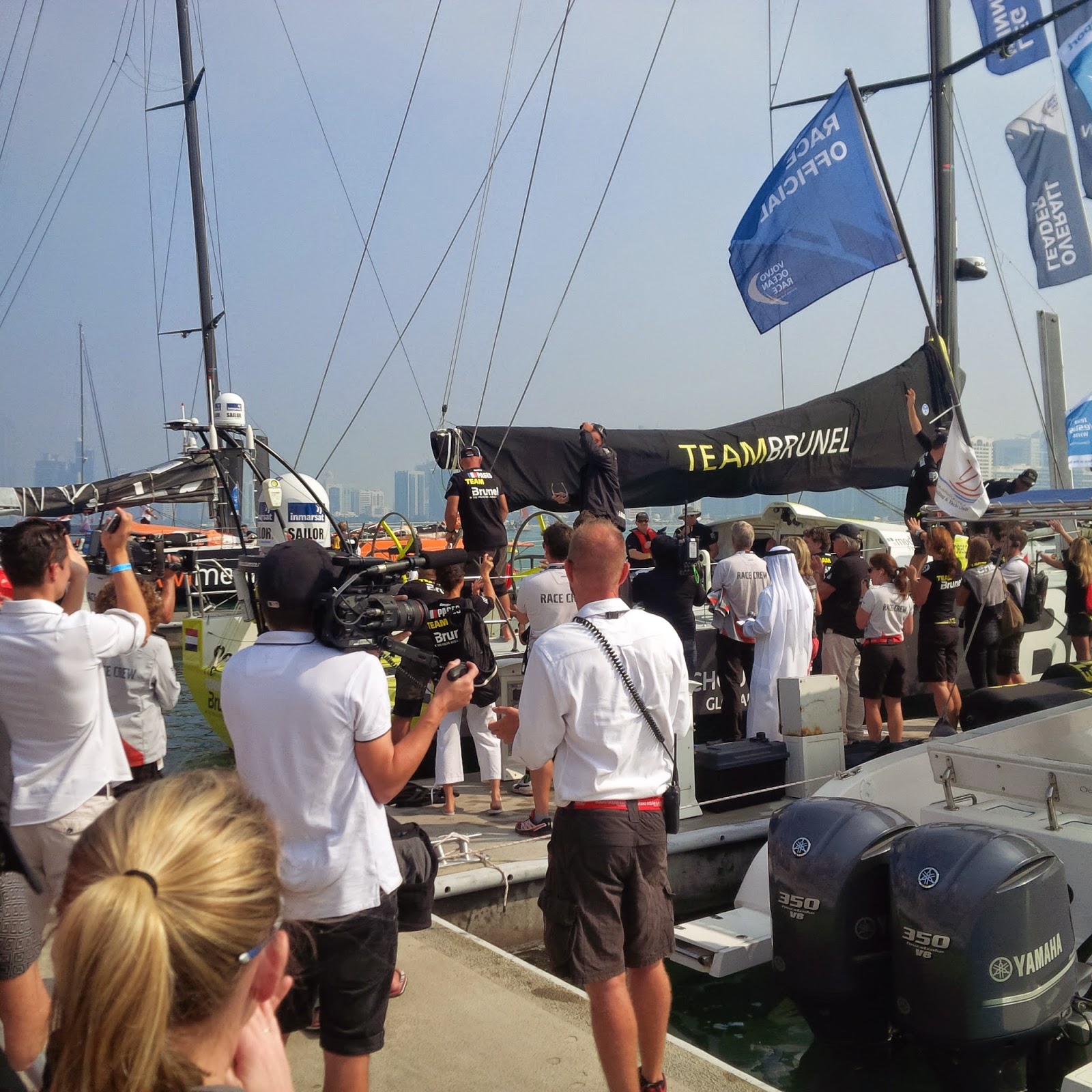 I also met Mr. Clean from Sailing Anarchy and chatted a bit with him.  A very interesting guy and I hope he never changes his irreverent style.