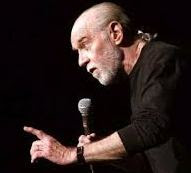 There is an absolutely brilliant piece by George Carlin on euphemisms.  A don't-miss performance which really skewers the subject.

(While it is easy, and appropriate, to make fun of political correctness excesses, I recognise that the general notion has it merits and can be quite beneficial in the right context.)

Anyhow, after watching the video, I started thinking - are there any euphemisms in our noble sport?  Are there any sailing terms that have evolved from straightforward words or expressions into mushy, anodyne, soporific, mealy-mouthed drivel?

I am not referring to nautical jargon.  Although it is not really necessary - what do we gain by saying starboard and port instead of right and left -  it is charming and a link to the past and I would not wish to change it.

But, I am having a hard time thinking of any euphemisms in sailing.  The only one that comes to mind is PFD - Personal Flotation Device.  What's wrong with life jacket or even life vest? Nothing apparently in the eyes of the US Coastguard or RLNI, both of whose websites refer to life jackets.  But the Racing Rules of Sailing use personal flotation devices.

Are there any other sailing euphemisms ?

As in most sailing clubs we really encourage the youngsters as they start racing. Not just the parents, but all of us enjoy seeing them participate.

Very gratifying to see them progress, but occasionally something happens that makes us wonder what they are learning and from whom?

Our Club uses personal handicaps to score some of the events and these handicaps are, of course, a function of how well the sailor does in prior races.

So, yesterday the PRO was dutifully preparing to score the end of the youngsters' race and was perplexed to see the leader coming toward the finish line with a substantial lead suddenly starting to sail in circles just before the finish line.   Clearly it was not a penalty and the PRO asked him what he was doing.

The young lad replied, with a disarming honesty "I'm winning but I don't want my handicap to go too low."

The PRO put short work to that and we all had a good laugh over it at the bar later on.
Posted by Keep Reaching at 11:14 PM 2 comments:

Yesterday we had a shamal - a wind funnelling down from the Turkish mountains and over the Gulf countries. Wind was over 20 knots and we decided not to race but instead to go out for some blast reaches and other fun.  Lots of fun and challenging with the blustery conditions giving me several occasions to wash off the sand from my sails with a quick dunk in the water. But never mind the occasional capsize - a screaming reach or two is all it takes to remember why dinghy sailing is so exhilarating.

But the real treat of the day was after dinner, almost a year to the day since I watched Azzam win the Abu Dhabi in-port Volvo Ocean race.

As I have mentioned before, one of the advantages in living in a place like Abu Dhabi is being able to easily access world-class events like the Volvo Ocean Race in a way that would not be possible in many of the larger stopovers.

I was at one of our outdoor bars with a few fellow sailors following dinner and I noticed a familiar face over at the bar.  It was Ian Walker, the skipper of Azzam, the Abu Dhabi entry in the 2012 race.  As luck would have it, I was wearing a Volvo race windbreaker (yes, the  savage depths of an Abu Dhabi winter require a light windbreaker at outdoor bars) and a colleague was wearing a Farr shirt.  A few minutes later Ian was gracious enough to come over to our table and spend the next hour chatting amicably with us.

He was amazingly open and candid about the race and various personalities from sailors to royalty, etc.  It is always interesting to hear a real insider's version of things and especially from a world-class sailor chatting about everything from the Volvo to the Vendée Globe (Mike Golding is an old friend), the Olympics, various encounters with celebrities and royalty, etc., all the while delivering the information in a completely down-to-earth way.

For the next Volvo, it is clear that the Farr 65 one-design aspect will be a fundamental change for the race - lowering the costs and doing what a one-design should do - levelling the playing field not only for the boats and equipment, but also weather information.  The budgets of the 2011-2 teams varied enormously - with Groupama, the winner,  spending more than twice what most teams did.  As Ian said, basically each team will order a boat from Volvo and take what it gets.

As to Ian's role in the next race, stay tuned.  Volvo says it will start announcing the route of the next race as early as next week.
Posted by Keep Reaching at 8:33 PM 1 comment: