Did Mozart Sail a Laser ?

I am not sure what the historians would say about Mozart and Lasers  (or the fact that Bruce Kirby allegedly invented the Laser after Mozart's demise).

But I think the evidence of Mozart sailing a Laser should not be dismissed.

A couple of weeks ago I was out for our weekly race and, as usual, once I was on the water everything seemed right with the world (except for my race skills - but that is another matter).  I was particularly struck by just how right everything seemed.  The quotidian cares of the world completely dissipated. My existential angst evaporated.  Silly worries over life, money, relationships, etc. simply floated away in the wake of my boat.  I honestly don't remember how I did in the race - it doesn't matter.  I knew that sailing in my Laser was a restorative balm and that I had been granted entry into a space that was, if not other worldly, at least close enough to sense the peace emanating from it.

Then last night I watched for about the 5th time Joseph Losey's amazing film of Mozart’s Don Giovanni.  And, several times during it, Mozart's breathtakingly beautiful music and the exquisite Italian setting transported me away to another space that was also far, far removed from the daily clutter and messiness of my life.  Mozart was clearly a genius and Don Giovanni is an absolute proof of that.  The story, like many opera stories, is better not examined too closely for logical consistency – but never mind - when the music is so heavenly, storyline logic is not very relevant.

So, what could have inspired Mozart to compose such incredible music?  It must have been something that allowed him to sense things beyond the everyday, beyond the ordinary.   Laser sailing immediately springs to mind as a possibility. In fact, listening to his operas is all the proof I need to know that he sailed Lasers.

But, just to be sure - is there anything else that might be evidence of his Laser experiences?

We could look to the beautiful "Soave Sia Il Vento" trio from Così Fan Tutte which may well be another proof.  The lovers bid adieu to each other, singing “On your voyage, may the winds be gentle; may the waves be calm; may all the elements respond to your desires…”  I can well imagine that, following a few hours of Laser sailing in 25 knots, Mozart felt fully inspired to compose the lovely music as an ardent hymn to the wind gods.

There you have it. Who could doubt that Wolfgang was a Laser sailor. 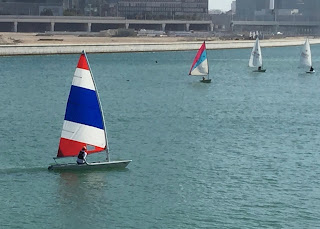 I recently bought a new (unofficial) sail from Intensity - and I opted for the Red, White and Blue version.   Quite versatile - it could be a reference to the red/white/blue flags of the US, France, Holland, Russia, Czech Republic, Norway, New Zealand, Australia, UK, Luxembourg, Liberia, North Korea, Iceland, Cuba, Chile or Costa Rica.

Despite what I was hoping for, I am still a mediocre sailor with it, but at least I really stand out in the fleet.  And it is a lot harder to get lost in the mid-line sag at the start.

By the way, this photo was pre-race - before the Warning Signal.  I was really not that far behind the fleet.  As to the race itself, never mind - just admire the lovely sail.
Posted by Keep Reaching at 8:49 AM No comments: