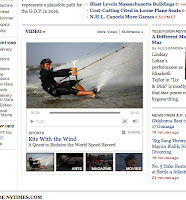 The New York Times web version has a front page video in its extreme sports series - about kite surfing champion Rob Douglas seeking to regain his world sail speed record that was recently broken by the Vesta Sailrocket.

I had mixed emotions reading it - it was great to see sailing on the front page of the NYT but sailing at extreme speeds in specially constructed canals several inches deep is so far removed from the sailing that most mortals do that it seems to me a poor way to promote the sport to the general public.  As someone says at the beginning of the video, it is like driving a Formula One race car.

Which reminded me of a debate I used to witness with respect to sponsorship of Formula One races in general.  From a marketing point of view, is it a smart investment?  Sure, there is great brand exposure but are the colossal sums likely to pay off by really convincing enough consumers to purchase a particular brand of car, tire or whatever?  Personally I would not make much connection between the hyper-sophisticated machine on the Formula One track and the car or tire I am considering.

Back to sailing, one could say that the new America's Cup is pretty far removed from our weekly dinghy racing but it is really just pushing an existing format/activity to another level - admittedly out of reach of most sailors, but I personally applaud the new format and think it has a much better chance of attracting spectator interest than the traditional America's Cup.  And I really enjoy watching it with the graphics.

Another thing that annoyed me about the NYT video - particularly as a front page exposure to sailing -  was its heavy dose of sensationalism - featuring clips of some kite-surfing idiot who jumped over Brighton Pier and an even bigger idiot who took a bone smashing jaunt in hurricane force winds.
Posted by Keep Reaching at 6:58 AM